The photonics industry is flourishing in Israel. 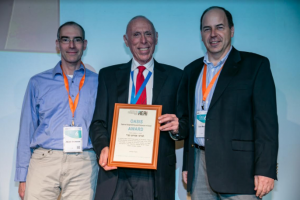 The optical industry in Israel started with E Goldberg, who founded Zeiss-Ikon in Germany, and then escaped from the Nazis to Israel in the 1930s. He built Goldberg Instruments, which manufactured a variety of optical products. The company later became Elop. In the early 1950s, Z Tabor developed solar collectors for water heating, which are used in many houses in Israel, as well as around the world. In the early 1960s, J Yaffe, who immigrated to Israel from the UK, left the Weizmann Institute and established Rehovot Instruments, which developed IR systems, and subsequently merged with Elop. In the early 1970s, some of the Israeli government ministries realized that photonics is an important enabling technology and they provided significant support funds. This injection of funds, together with the mass immigration of electro-optics scientists and engineers, especially from the Soviet Union, led to a surge of development both in academia and industry. In academia, many more research groups were established and flourished. In industry, a large scale-up centered, at the beginning, in fields related to defense, in the Israel Aircraft Industries, Elop and Rafael. But parallel to this, other industries concentrated on medical, metrology and printing applications.Optical research started in Israel at the Hebrew University of Jerusalem in the late 1920s. This was done by two researchers who emigrated from Germany: S Sambursky worked on spectroscopy, and G Wolfson worked on the properties of light. In the 1950s and 1960s, the pioneering researchers in optics and electro-optics were S Yatsiv and Z Lev (Hebrew University), and then, in the 1960s and 1970s, A Friesem (Weizmann Institute), E Marom (Tel Aviv University), B Sturlesy (Rafael) and Y Shamir (Technion). Today, advanced research and development activities are carried out by thousands of people in academia, in research institutions and in industry. Hundreds of students attend courses in optics, electro-optics and photonics in the major seven universities and in several colleges. The Israeli basic and applied research in photonics is highly respected all over the world.

It is estimated that at least 10,000 professionals work in optics and electro-optics in Israel today, in academia, research institutions and in about 500 companies. Israel is nicknamed a “Startup Nation” and indeed, many of these companies are high-tech start-ups. They are involved in bio-photonics, defense electro-optics, optical communications, optical devices, optical testing and quality control, renewable energy and printing. Many global corporations have established research, development and manufacturing centers in Israel, including GE, Phillips, Carl Zeiss, Samsung, Johnson & Johnson, Nokia Siemens, Microsoft, Google, Intel as well as others

OASIS conferences in Optics and Electro–Optics, are held every two years in Tel Aviv and chaired by Abraham Katzir. The last conference, OASIS 6, was held in February 2017 and attracted more than 1000 participants, many from abroad. 60 companies exhibited their products and there was a delegation of 25 European companies.

It is surprising how a tiny country like Israel, with a population of eight million, achieved such excellent scientific research and highly successful industries. It stems, first of all, from the excellent students and the education that they get at university and college. There are close collaborations between scientists in academia, research institutions and industries, and this is very fruitful and shortens the development time of products. The government agencies continue to support both pure research in academia and development in industry, as well as international collaborations supported financially. Today, private investors recognize the potential of photonics and are willing to invest in new companies in Israel.

Ben Gurion, the founding father of Israel, used to repeat the words of the Prophet Isaiah: “I shall submit you as a light unto the nations”. Ben Gurion added: Israel must be a “lighthouse to all nations.” We all try to follow this call!